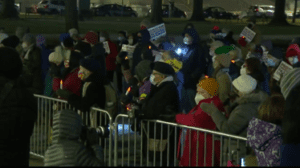 On January 6, approximately 150 people gather together in below freezing temperatures to stand with LWV of Albany at a Candlelight Vigil held in front of the NYS Capitol building. The League speaker, Gail Volk, reminded people that all of their grassroots work was important, stressing the need to participate, become educated and also encouraged them to join organizations such as the LWV, which is not just for women only, in the effort to preserve democracy. Television coverage was great- local NBC, CBS and ABC affiliates, with stories in last night’s news reports. Also had great coverage from the public radio station, WAMC. (see photo upper left)

In Huntington, the League approximately 50 people rallied on January 6 with the message of saving American democracy by protecting the vote. (see photo upper right)

Great job by LWV of Utica/Rome! Last year, the Utica/Rome LWV was one of the chapters that received funding from LWVNYS for Get Out the Vote initiatives. We had proposed putting together a videos targeted at formerly incarcerated individuals who are now eligible to vote, but may be unfamiliar with the process. As we began creating the video, we decided to create several short videos on selected topics related to the process, since there are many constituent groups to whom this information would be beneficial. We ended up with 6 short instructional videos that can be used by anyone in New York State. The topics are:

These videos can be found on our YouTube page; feel free to distribute/use as you see fit:

LWV of Buffalo has scheduled a meeting at which Elizabeth Lowes will present information about the nuclear clean-up at the West Valley Demonstration Project and environmental and health concerns related to the nuclear waste stored there.

Peter Iwanowicz, Executive Director of Environmental Advocates NY and a Member of the New York Climate Action Council, presented an analysis of the long awaited plan for the State of New York to implement New York’s clean energy and greenhouse gas emission goals set forth in the Climate Leadership and Community Protection Act at a recent meeting of LWV of Saratoga.

Kim Margosian of LWV of Syracuse had a Letter to the Editor published regarding redistricting. See the letter here: https://www.syracuse.com/opinion/2022/01/onondaga-county-did-not-listen-to-the-voters-on-redistricting-your-letters.html

LWV of Brookhaven invited Suffolk County Sheriff, Errol Toulon, to talk with them about initiatives he has introduced in the Suffolk County jails, especially for those leaving incarceration and youth who are serving time.

Susan Weisfeld of the LWV of Rivertowns drafted a short summary of the impact Sarah Weddington, 26-year old attorney who argued Roe V Wade, had on reproductive rights. Sarah passed away in December, 2021. See the summary here.

Over 180 people attended (by Zoom) the recent meeting of the LWVs of Tompkins County and Cortland County entitled, Bitcoin, Cryptocurrency, Blockchain: the Promise and Peril. Speaker Irene Weiser, Coordinator of Fossil Free Tompkins, covered the basics of cryptocurrencies and blockchain technologies and how the energy appetite of some forms can threaten to derail achievement of NYS climate goals.

The LWV of Rochester is hosting its Next Community Forum: Teaching the History of Racist Policy and Resistance in Rochester. Shane Wiegand and Kesha James will examine how federal and local policies like redlining, racially restrictive covenants, blackface minstrel shows, and urban renewal segregated Rochester, built wealth for its white citizens and disenfranchised people of color.

This year the Committee for Criminal Justice Reform (CCJR) of LWV of NYC partnered with the Katal Center and other statewide organizations to work on the “Less Is More” campaign. “Less Is More” addresses the injustice of immediate incarceration of people on parole for accusations of technical violations: such as being late for hearings, missing a probation appointment, or having a positive alcohol urine screening.

Heather Urtz Amendolare, library director at the Village Library of Cooperstown and a new member of the League, has invited League members to join in a group reading and discussion of Ezra Klein’s Why We’re Polarized. Heather is trained as a facilitator for the series and would be leading the group discussion.