As a result of the Court of Appeals landmark decision invalidating Congressional and state Senate maps drawn by the legislature, the legislative lines for Congress and state Senate were drawn by a special master appointed by the trial court and finalized on May 20, 2022. Primaries for Congress and state Senate were moved to August 23rd, but the state Legislature declined to move the statewide and Assembly races from their scheduled June 28th date.  The state League filed two pro bono lawsuits — one in federal court and one in state court — to get the primaries consolidated. The federal case claiming infringement of voters’ First and Fourteenth Amendment rights under the Constitution was decided against the League, but the judge noted in his ruling that the case was “worth bringing and trying.”

The state case was an Article 78 proceeding filed in Supreme Court in Albany to invalidate the Assembly lines that the Court of Appeals said were unconstitutionally drawn but could not be struck down in that case for procedural reasons.  This case was decided against the League, but in a separate and parallel state case an Appellate level judge ordered that the Assembly lines be redrawn for 2024. The rationale was that it was too late for 2022.

2022 Concurrences
The new position on the structure of election administration in New York state sent to local Leagues in January failed to gain the necessary 2/3 approval. Twenty-three Leagues and 11 individuals responded.  However, our current positions fully allow us to support needed reforms to election administration that fall short of eliminating the bipartisan constitutional requirement for “qualifying voters, or of distributing ballots to voters, or of receiving, recording or counting votes at elections.”

At the same time as the election administration study, Local Leagues and members were asked to support a new position allowing individuals in prison the right to vote while still incarcerated. Twenty-three Leagues and 11 individuals responded, and the new position was approved overwhelmingly. The Board adopted the following new position on June 7th.

The League of Women Voters of New York State supports extending the right to vote to all currently incarcerated individuals.

Legislative Updates
Below is an overview of significant outcomes from the 2022 Legislative session.

The Governor is expected to sign the following three bills the League strongly supported this session. 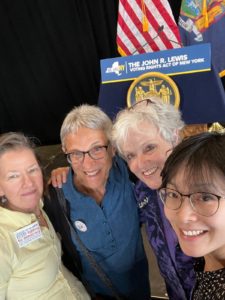 Cryptocurrency Mining Moratorium: This bill establishes a moratorium on cryptocurrency mining operations that use proof-of-work authentication methods to validate blockchain transactions. It was passed the Assembly and Senate on June 3, 2022.

Wage Transparency Bill: Requires employers to disclose compensation or range of compensation to applicants and employees. It was passed the Assembly and Senate on June 3, 2022.

The following bills were not passed in this legislative session:

We will continue to advocate for these bills next session – and plans for success will be developed with coalition partners during the fall.