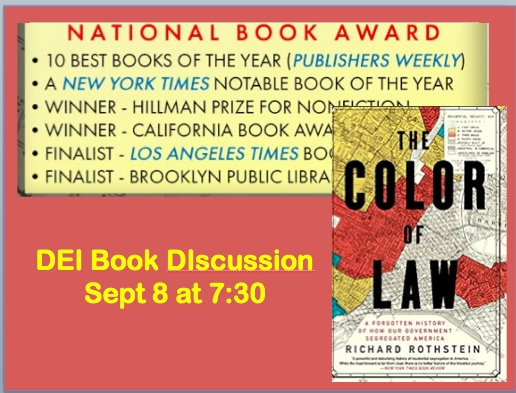 The Color of Law: A Forgotten History of How Our Government Segregated America

Richard Rothstein’s The Color of Law offers “the most forceful argument ever published on how federal, state, and local governments gave rise to and reinforced neighborhood segregation” (William Julius Wilson). Exploding the myth of de facto segregation arising from private prejudice or the unintended consequences of economic forces, Rothstein describes how the American government systematically imposed residential segregation: with undisguised racial zoning; public housing that purposefully segregated previously mixed communities; subsidies for builders to create whites-only suburbs; tax exemptions for institutions that enforced segregation; and support for violent resistance to African Americans in white neighborhoods. The Color of Law forces us to face the obligation to remedy our unconstitutional past.

Winner of many prizes, including

“Essential… Rothstein persuasively debunks many contemporary myths about racial discrimination…. Only when Americans learn a common―and accurate―history of our nation’s racial divisions, he contends, will we then be able to consider steps to fulfill our legal and moral obligations. For the rest of us, still trying to work past 40 years of misinformation, there might not be a better place to start than Rothstein’s book.”― Rachel M. Cohen, Slate

“Rothstein’s work should make everyone, all across the political spectrum, reconsider what it is we allow those in power to do in the name of ‘social harmony’ and ‘progress’ with more skepticism… The Color of Law shows what happens when Americans lose their natural rights of life, liberty, and the pursuit of happiness, or in the case of African-Americans, when there are those still waiting to receive them in full.”― Carl Paulus, American Conservative

“Rothstein’s comprehensive and engrossing book reveals just how the U.S. arrived at the ‘systematic racial segregation we find in metropolitan areas today,’ focusing in particular on the role of government…. This compassionate and scholarly diagnosis of past policies and prescription for our current racial maladies shines a bright light on some shadowy spaces.” ― Publishers Weekly [starred review]

Richard Rothstein is a research associate of the Economic Policy Institute and a Fellow at the Thurgood Marshall Institute of the NAACP Legal Defense Fund. He lives in California, where he is a Fellow of the Haas Institute at the University of California–Berkeley.

The Zoom link will be sent to members who register in advance for this meeting:
https://us02web.zoom.us/meeting/register/tZAodemppjIsHdRli5Z46SY-A7dFi5p1Po7e
After registering, you will receive a confirmation email containing information about joining the meeting.