With the rapid pace at which technology is advancing, people are purchasing new computer systems, televisions, DVD players, and other electronic components in record numbers. Industry experts estimate that American consumers dispose of 400 million units of electronic equipment per year. Recycling electronic waste protects the environment by keeping toxic materials, such as lead, mercury, cadmium, and arsenic from entering the waste stream.

In accordance with the New York State Electronic Recycling and Reuse Act of 2010, since January 1, 2015 consumers are prohibited from disposing of electronic waste at any solid waste management facility or placing electronic waste in the trash or at the curbside for trash collection.

Residents served by the Town of Hempstead Department of Sanitation may arrange for a special pick-up of electronic waste at their residence by calling 516-378-8484. All Town of Hempstead residents, including residents of incorporated villages within the township, are permitted to bring electronic waste to the Homeowner Disposal Area located at 1600 Merrick Road in Merrick. Residents can also contact the manufacturer to obtain information on how to recycle the equipment.

Town of Oyster Bay – E-Waste Recycling is held on the same dates as the S.T.O.P. Program and Homeowners Cleanup. The Town of Oyster Bay’s scheduled Electronic Waste Recycling program addresses the growing nationwide problem of e-waste, such as computers, cell phones, pagers and VCRs. These items not only have a low level of biodegradability, but they contain materials such as lead, mercury and cadmium that are highly toxic when released into the environment. This program ensures these items will not wind up in a landfill or incinerator.

The following can be brought to Oyster Bay STOP and Clean-up Days:

“The capacity to combine commitment with skepticism is essential to democracy.” 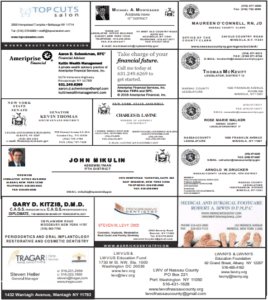