Thank you to everyone who attended our lobby day this week! We had representatives from all over the state including Utica Rome, Rochester, North County, Mid-Hudson, Albany, Saratoga, Rensselaer, Schenectady, and New Castle. A total of 55 members attended the trainings and conducted lobby visits with more than 16 legislators. Our members were trained by experts on our various issue areas. Barbara Thomas, LWVNY Issues Specialist on Women’s Issues and Medical Aid in Dying, briefed members on reproductive choice, contraceptive coverage, salary history, and medical aid in dying. Alex Camarda, Sr. Policy Advisor at ReInvent Albany, briefed members on ethics and campaign finance issues including the Database of Deals, Clean Contracting, pay-to-play, and closure of the LLC loophole. LWVNY Legislative Director (me J) shared information on the League’s current voting reform agenda and single payer health care. The session ended with a brief overview of the do’s and don’ts of lobbying and a quick rundown of how to track bills using the Assembly website, as well as a plug for the League’s Political Action Tool: Voices.

After the training, the Leagues broke out into groups to attend their lobby visits. It was a great day with awesome turnout by our members. Thank you again to everyone who attended! Thanks to Tom Loughlin, Jr, of the Utica/Rome League for the photos below: 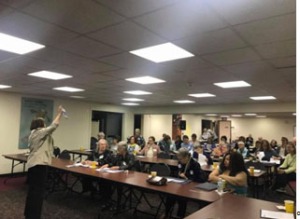